Weather more of the same dry and windy,conditions making excavation and recording  difficult, but we are slowly getting a handle on the geology.

The second  trench we have been excavating is Trench 2.

The marching camp appears to have been reduced in size on at least two occasions.  This trench cuts across the North/South ditch line of the smaller of the two  internal divisions of  the marching camp, and also includes  a roundish feature,  the aim being to date the subdivision. 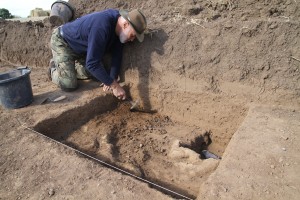 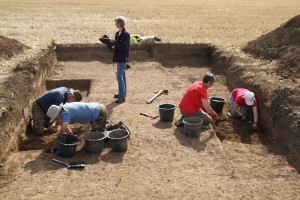 Trench 1 also still fighting us all of the way. Titula ditch to the front of the entrance now clearly defined and producing pottery. Main ditch terminal still proving elusive. 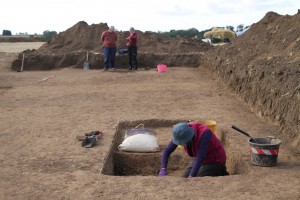 Pottery collection from a 10 min field walk in the ploughed field adjacent to main site. Concentration of Tees Valley Ware(11-13th C) from an area which indicated a possible structure in the magnetometer survey. 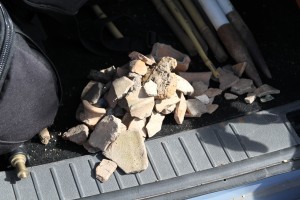 Day 2 dawns dry and windy, never again will I complain about excavating in heavy boulder clays, when the alternative in sand and gravels is infinitely worse for  defining archaeology.

As well as the research element of this excavation, there is no doubt searching questions will  be raised as to the  current procedures utilised by the archaeology community during developer funded watching briefs on this type of geology.   Instant judgements  are often required under pressure from developers after the removal of top soil,  as to whether archaeology is present or not,

We removed 50cm of topsoil and know that the archaeology is 15-20cm below the deepest ploughing for crops such as potatoes, and is therefore undisturbed from modern agriculture.   We have numerous crop mark evidence, and we also  carried out a large scale magnetometry survey with stunning results,  revealing a multi-period archaeological landscape. With our  precisely  located trenches we knew the archaeology was there,   yet with the one exception of a ditch across Trench 3 that conformed to  having a brown loamy fill against yellow sand and gravels, all of our trenches in developer funded investigations would have been abandoned, as containing no archaeology.

At the horizon between topsoil and subsoil  and as we became more familiar with the geology,  the features which we are confident are prehistoric and Roman  can only be teased out by a slight textual change between a slightly looser natural  sand and gravel, and a harder lens of sand and gravel that has accumulated on the top of the feature, there is no clear edge to this change, no colour difference, and location has been a matter of accurate measuring in from known points to  identify  a general area of investigation.  Once the feature is tentively located and the crust is broken through, a slightly more conventional ditch fill becomes apparent. 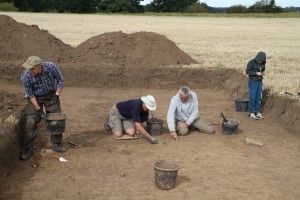 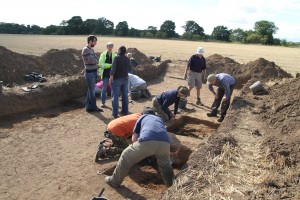 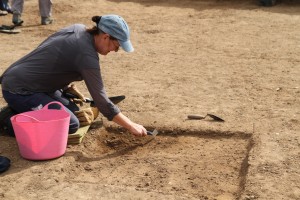 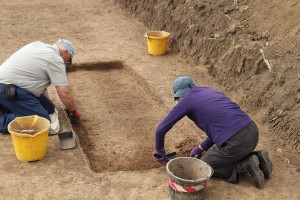 To put the excavation in context, here is a potted version of the trench layout and the reasoning behind it. Trench 1 will be today other trenches to follow.

Trench 1 is considered the main trench and straddles the  northern gate of the marching camp, one of two gates we have identified, as we also have the southern gate located. The northern  gate faces  the direction of travel,  and most danger for the campaigning  army, and  would be considered the main gate, the Porta Praetoria, with the Via Praetoria being the road that led  from the gate to the camp centre. Trench 1  straddles some 4.5m of  the ditch circuit including the eastern terminal of the gate, together with 5.5m of the 10m wide entrance.  The ditch also extends to the north to  include 5.5m of the tituli, which is a section of bank and ditch some 8 to 10m in front of the gate opening, and 10m wide,  designed to create a barrier the same width directly in front of  the gate opening. The purpose of the tituli is to stop any attacking force from carrying out a frontal attack, forcing them to the sides, slowing their momentum  and splitting the attack force.

Today we also aimed to begin our investigation of the river bed  with Rolfe Mitchinson and Bob Middlemas. Both are  amateur archaeologists who for  over 40 years have been central to advancing our  understanding of river crossings  of the Roman period in the North East. Their collection of material from the bed of the river at Piercebridge is unsurpassed in its breadth, and with the British Museum currently analysing and archiving the material, this is an outstanding contribution to research archaeology.

Today unfortunately the river level had risen overnight some 60cm and was heavily coloured and flowing fast. After a brief splodge Rolfe and Bob decided it was too dangerous. 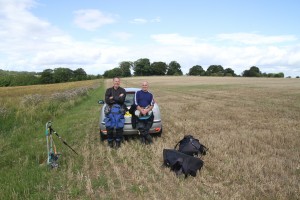 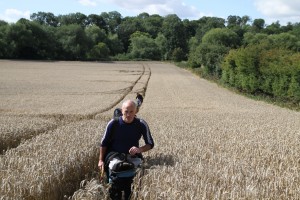 Set up time lapse camera on 7 metre mast overlooking Trench 1,  recording the exposure  of a number of anomalies including a linear feature.  In the afternoon session volunteers tasked to excavate several features  in Trench 1 and Trench 2.

Trench 1  investigates the north gate of the marching camp and tituli outside.  Excavation of the tituli produced our first piece of pottery in context, additionally several pieces of flint were recovered.

Visited the Fardeanside ford to the south of the site to establish the river level, river running about 30cm higher than normal .

Rolfe Mitchinson and Bob Middlemas arrive Thursday AM to begin their investigation of the river bed for evidence of a fixed crossing point. 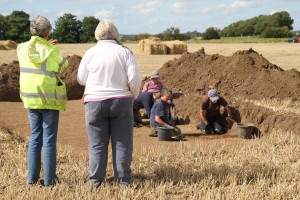 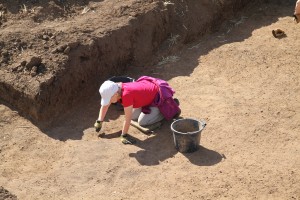 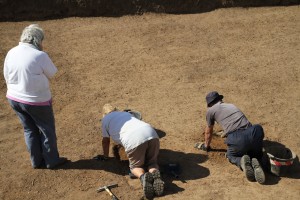 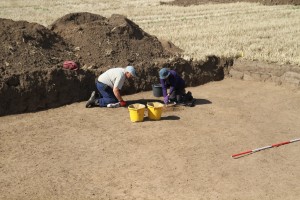 Second day of trench opening, and you would think with all the archaeology  present on this plot, the various features would be easy to find once the topsoil is off.  Think again!

The site has 500mm of topsoil with a thin layer of sand and gravel subsoil, and complicated with unexpected narrow rig and furrow. With a beating down sun, and breeze drying the ground out practically as it was opened up, nice clean dark archaeological features against a sandy natural were not exactly jumping out at us.

The north side of the marching camp ditch running for 200 m  right up the middle of the plot is clear in both geophysical survey and cropmarks, yet locating it has been the bain of the day. 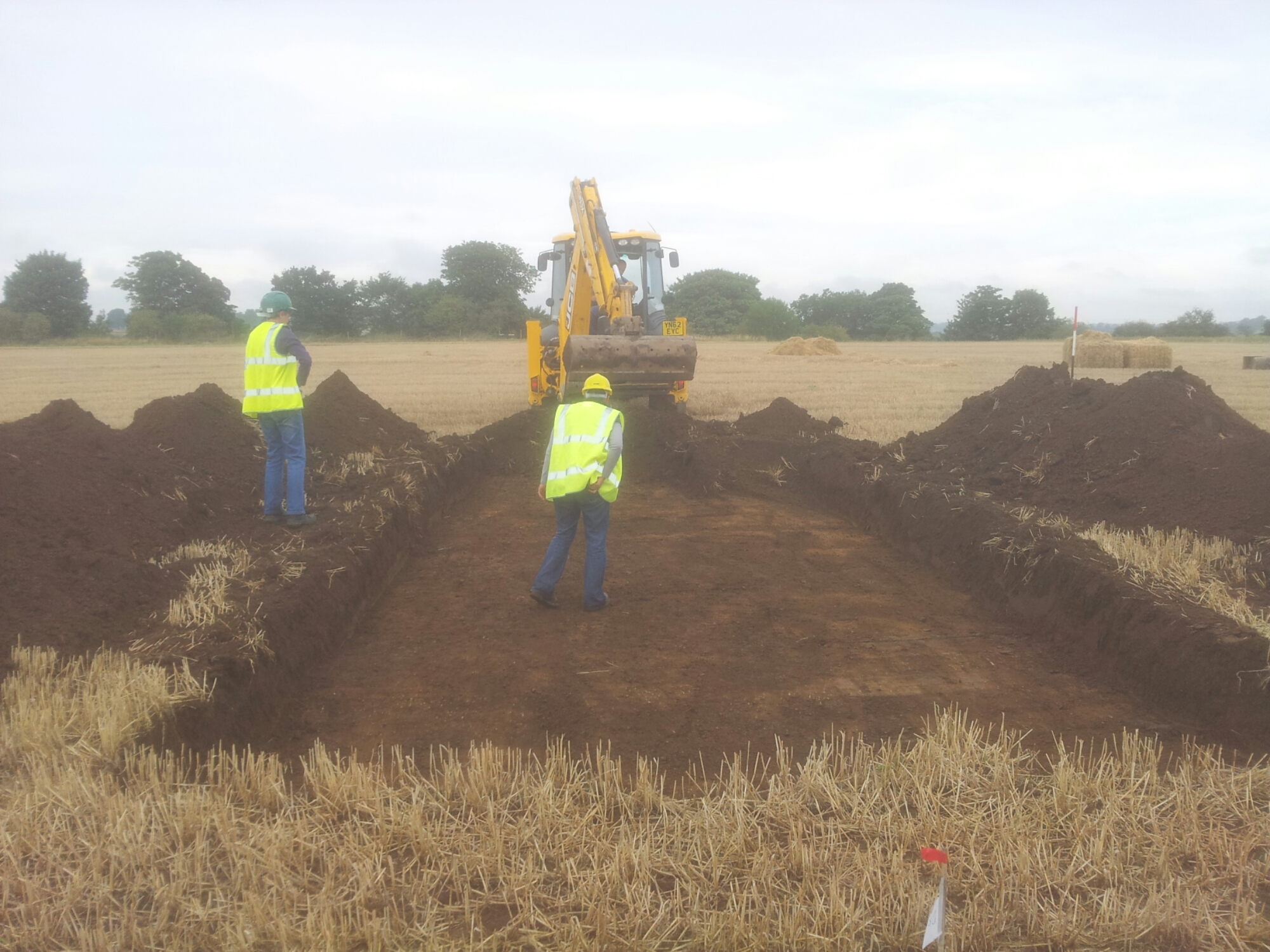 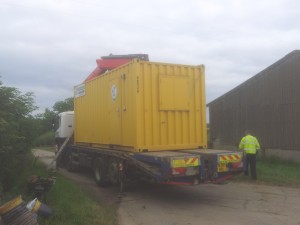 After a belated delay due to vandalism, our security cabin and loo finally arrives. For practical delivery reasons the cabin is some 800 metres from the excavations, volunteers in need of the facilities please note.

The cabin can be seen at the entrance to Newsham Grange Farm. Please be aware the farm is a working arable farm in the middle of the harvest, the grain store is adjacent to our cabin, and all the hardstanding is used as a turning circle and loading area for a succession of 30 tonne grain lorries, arriving and departing throughout the day. Drivers must park well before the farm entrance on the grass verges etc and walk upto the cabin, please bear in mind that these lorries are wide, as are the tractors, trailers and combines that may use the road, so park as far onto the verge as possible. We are guests on Brians farm at his busiest time of the year, please try to avoid inconveniencing him, his workers and contractors. 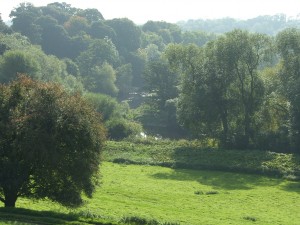 Amateur archaeology has  a long and honourable tradition in archaeological research, yet despite its history, in recent decades the term amateur within the archaeological  community, has deliberately been devalued from honourable unpaid endeavour, to a derogatory meaning of low quality.

The change  happened in parallel with the professionalism of archaeology some 30 years ago, and the intervening years have been  a perpetual rearguard action to maintain our independence of spirit, mind and action.  Many reclassified themselves as  independent archaeologists, and professional archaeology created their own new label of community archaeology and community archaeologist, to provide  supervised investigation of mundane sites of little research value whilst  handily giving paid employment to professional supervisors.  Many of us, the intransigent, the stroppy, the boneheaded have held out, defended our amateur status and it honourable tradition  by continuing to carry out out original research seeking new explanations,  free of the closed mind of the herd mentality of the archaeological community, with the intention of  taking the sum of our knowledge forward in a positive and valued way.

in November 2013 I attended a day conference at York celebrating 150 Years Of Roman Yorkshire, held  by the Yorkshire Archaeological Society. In his summing up Professor Martin MIllet made a striking statement, he said that effectively the money has run out for  archaeology, local archaeological units are closing, universities are scaling back, developer funding is drying up, and that the baton will have to be handed back to the local societies.

Those pesky amateurs will have to get their act together again, because it seems nobody else can or will.