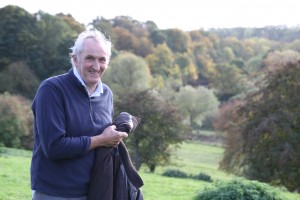 I was first attracted to archaeology in the late 1980’s with my brother Graham,   but for the life of me I can’t remember what attracted me to the subject in the first place. I probably followed the same route as many.  An interest in history, initially a number of evening classes led by Cleveland County Archaeology Unit, before completing  a Diploma in British Archaeology at the University of Leeds in the early 90’s.

I joined the Teesside Archaeological Society and volunteered to set up a  fieldwork group, whereas  I was enthusiastically co-erced onto the committee,  shortly afterwards to be ‘promoted’ to serve also  as secretary for a number of years.

I established the Mid Tees Project to look at the neglected Roman period in the Tees valley, especially the significance and role of Cades road, and carried out a number of investigations, including investigating and establishing  the Roman villa at Dalton on Tees as a classic developed villa, moving the extent of the villa landscape north to the Tees.

In 1999 I gave an impromptu talk on one of my pet areas of interest geophysics,  to the Council for Independent Archaeology at their Sheffield congress on ‘Demystifying Archaeology’, after all three speakers pulled out. It is refreshing to see that the CIA from those early tentitive steps now produce the budget TR/CIA resistivity meter which  has 100 units carrying out valuable amateur archaeology.

In the real economy I am a communications and electronics specialist, and have a particular interest in the use of technology in archaeology, especially in the geophysical survey area, My  working life however has  switched between running my own business locally,  and employment maintaining national communication infrastructures, this coupled with the needs of a growing family resulted in limited opportunities to conduct research. After 1999 there was   an 11 year gap in my archaeology due to work and other pressures,  before returning to archaeology in 2010. In the intervening years the Mid Tees Project went into a long slumber, as the principal (me) left the scene. On returning to archaeology and waking up the project,  I have made it incumbent  that in future there  should be no single principal , but a co-operative  project to ensure project continuation. My first port of call for leaders for the project were Jenny Parker and Linda Davies from the early days.

I have from the beginning always considered myself an  amateur archaeologist, who spurns conventional thinking and established theories,  in preference for  original research and fieldwork. A key focus of my work has always been the promotion and extension of traditional amateur archaeology , which since the early 1990’s has been  under threat.

Although the instigator of the project, I principally manage the  landscape research and geophysical investigations of our survey area, whilst also maintaining and writing this blog, and occasionally sticking a shovel in the ground when the urge takes me.

My fieldwork experience began at the age of 14, excavating with the Basingstoke & District Archaeological & Historical Society. It was then that I developed my interest in later prehistory and my lifelong fascination with the beauty of flint. As an undergraduate I worked for Martin Millet on the site of an Anglo-Saxon hall house at Cowdray’s Down. After coming to the North East I joined the Teesside Archaeological Society, excavating the Roman villa at Dalton-on-Tees and elsewhere in the Tees Valley. Major collaborative projects have included Foxrush Farm Iron Age/Roman site near Kirkleatham with Tees Archaeology and Streethouse Farm alongside Steve Sherlock. I have also taken part in many excavations across the north-east of England such as Catcote, Stewart Park in Middlesbrough, Sedgefield, Binchester and Arbeia and have taken part in several Time Team programmes. It is as a result of working on some of these sites that I am beginning to develop an interest in the archaeology of early industrial processes, particularly salt manufacturing.

I have a Postgraduate diploma in Archaeology from the University of Leeds. Archaeology forms a major part of my life, but I am strictly and unashamedly an amateur archaeologist working instead as a librarian. I was Reference and Local Studies Librarian at Middlesbrough for 25 years and am now working as a college Librarian in St Chad’s College, Durham University.
As a committee member of the Teesside Archaeological Society I edited the society’s Bulletin for 15 years and several other publications. I have also co-authored a couple of local history books about Teesside.

As one of the project managers,  my role alongside Linda Davies is to project design and manage our  rolling excavation programme.

This section on the blog will include potted bio’s of our project management and specialists.

It is also a call to arms!

Are you are looking for an interesting multi-period site  that fits your research plans, currently unknown to archaeology.

Are  you  a free thinker?

Do you embrace our ethos?

Are you unencumbered by  establishment group think?

If you fit these criteria, and have archaeological skills or specialisms you are prepared to offer  to the project freely and willingly in return, then  it is time you gave us a call.   Whether you are   an amateur ‘ dabbling about’  on weekends,  an undergrad or post-grad irritated at the lack of opportunity to work on new sites, or even a professional earning a crust from archaeology, then this this project offers you all a major opportunity to make a statement in archaeology.  That is of course if  you are prepared to put the time in.

The Mid Tees Research Project is an amateur research project set up to reflect the lessons learnt in the 1990’s with its predecessor the Mid Tees Project. The earlier project organically developed using  the traditional  hierarchial  structure common to archaeology, with a single project leader driving the project, his project.

Unfortunately as the leader of the original project work took me away from archaeology and  the active fieldwork group sadly dispersed.     It’s  legacy  of course was a group  of former members who went on to work and develop their skills on sites throughout the region during the intervening years, some of whom were the first people I approached to come on board the Mid Tees Research Project.

When returning to archaeology, I was determined that a key element of the project was avoiding the fragile hierarchial structure  that had failed in the past when one individual moved on.  I therefore made an early decision to establish the project, and the major site at the heart of it  as a co-operative project.  I then  willingly handed over  my years of research  to a core group of like minded amateurs, with the intention that the research could be used to take forward ideas independently,  whilst allowing me  to continue to focus on my own area of specialisms, all under the umbrella of the project.