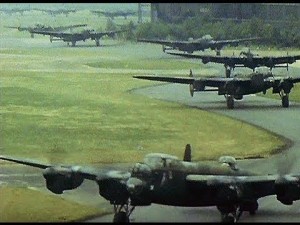 A touch behind with the photo processing tonight ,  so I am posting an interesting piece of research I carried out recently on the possible crossing points of Cades Road. The idea behind the research was to investigate known historical structures in the river,  with a view to investigating whether they were possibly being built on earlier foundations.

I have been doing some research on trying to narrow down the area  to look at as  starting points to focus on from the 7km stretch of the river from Low Middleton Ford to Worsall Wath. Obviously we know all the various fords crossing the river, which I have no doubt were used extensively simply because they were the furthest downstream crossing points for any North/South journey. However to validate our argument for Cades Road being a strategic road, it is inconceivable that a permanent all weather crossing point was absent from the route as it crossed the Tees. My research to date points to a number of likely anomalies that could point to a crossing, with in my opinion the most likely area being to the south of the marching camp/settlement in the vicinity of Fardeanside Ford.

I came up with this report of a riot in 1673, when a dam was demolished on the Tees in Egglescliffe, and have spent some time trying to pin down the likely location of said dam. Here is the account as published

“The informac’on of Francis Bunney, of Little Newsam, in the county of Durham, joyner, taken upon oath before William Blakiston, Esq. and John Morland, Esq. two of his Majties Justices of the Peace for the said county, the twenty-eighth day of September, Anno xxxiiio Caroli Sc’di.

A certificate follows to the same purpose, signed by four Magistrates and the Under-Sheriff (fn. 76). The dam is stated to belong to Sir Henry Marwood, Bart. and Timothy Maleverer, Esq. The rioters met by beat of drum, and did “discharge severall guns or pistols at the Fishgarth, and also threatened to burne the dwelling-house of one Christopher King erected there;” however, “as soone as they had done what they could at the pulling up of the said dam, they im’ediately dispersed, and returned peaceably to their respective dwellings.” (fn. 77) “

I have trawled through the documentary evidence looking for Fish Garth Dam and the adjacent Fishgarth Farm (Christopher Kings dwelling house)that is mentioned, and had the best results using the 1840 Tithe map and apportionments. Reviewing the whole of Egglescliffe parish I came up with no Fishgarths in the Egglescliffe township, four fields called Fishgarth in the Aislaby  township,(550,551,552,553) and four fields called respectively Fishgarth(555), South Fish Garth(575), North Fishgarth (576) and Fishgarth (578) in Newsham township.  I immediately assumed there must have been two fishgarths at some time complicating the search, however on consulting the tithe map, I found that the four Aislaby Fishgarth fields together make a parcel of land that mirrors nearly identically a detached parcel of Aislaby land to the south of our marching camp/settlement site and abutting the river, and the four Newsham Fisgarths are immediately to the north of the marching camp settlement site, potentially at or about the site of said Fishgarth Farm?. I have attached a tithe map with relevant Fishgarth areas marked out. This research of course does not ignore the possibility that no reference survives to the site of the 1673 dam, however having eight Fishgarth names surrounding our main site, has to be worthy of further research.

Obviously this is all circumstantial, although in the absence of signs telling us ‘No Diving off the Dam’, or ‘Day Fishing licences, only 1 groat’ being found discarded in the hedgerow, we have to work with what we have.

The Fishgarth dam in question in 1673 was presumably causing the same sort of problems for migratory fish as the current Tees barrage does with the same complaints, although more proactively made presumably because the structure was too high and substantial for the fish to pass. The Aislaby Fishgarths in Newsham take up all the detached Aislaby land in Newsham, and is just too much of a co-incidence for them not to be linked in some way. Detached parish lands are thought to be an anomaly of the ecclesiastical parish rather than the later civil parish, potentially taking whatever structure was in and abutting the river at this point back into the feudal period 9th to 15th century, and who know’s how earlier. The Term ‘garth’ is of course Anglo-Scandanavian in itself.

In a nutshell we have potential evidence for a structure in the Tees that at least had a substantial wooden superstructure in 1673, which was only partially removed due to the depth of the water at the time. The named Aislaby Fishgarth detached parish fields in Newsham have as their western boundary the hedgeline we have postulated as the route of Cades road. Assuming said dam respected the existence and continued use of Fardeanside ford, I would expect any dam to follow the method adopted at Low Middleton, where the ford is about 100m downstream of the weir structure, maintaining the integrity of the ford as a crossing point whilst also giving shallow access for whatever method was used to trap fish against the dam. 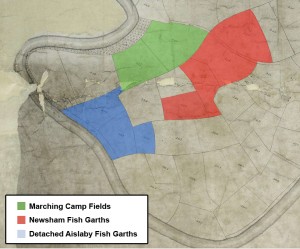 Good day on site. weather held until knocking off time, and then at 4.30 the heavens opened with rain and hail.