With the end of the excavation I will be ending the excavation daily blog or at least the perception of a daily blog. I will however continue the blog and develop the website going forward. I will also be publishing short interviews with a number of the  amateur archaeologists who dug with us, and  who kindly consented to being  video interviewed during the course of the dig. This project if it is about anything, it is about the people who enthusiastically carry out the work, and it is  at the core of the values and ethos of the Mid Tees Research Project that they are not simply shovel monkey’s to be used and  discarded at will, but a fundamental and integral part of the project going forward.

I want each and every one of them if they so choose, to have the opportunity once suitably skilled and experienced  to identify research areas of interest, and  to work independently  within the project  This project was founded by amateur archaeologists and will continue to be a beacon for amateur archaeological opportunity and endeavour.

Our sites are not recycled sites that everybody and their dog has talked about until the paint dries,  but brand new to archaeology  sites adding to the national archaeological story, all  found using minimal resources in the best tradition of amateur archaeology,  operating with an  open mind  receptive to all possibilities, exploiting the age old techniques of basic fieldwork,  coupled with the embracing of the vast array of open source(free) technology and data, with  the occasional quid quo pro arrangement  between like minded groups.

To end this stage I would like to thank all those who so far have contributed to our success, many   of which I will talk about their contribution in more detail going forward.

Where would we be without the support of the landowners and farmers. From my first contact with Brian Dale and his family , i have always found an interested and willing supporter of the project, obviously as long as it doesn’t impact on their commercial activities. Brian has been extremely acommodating over recent weeks at his busiest time of the year,  and for that we are very grateful.

Jenny Parker and Linda Davies hugely experienced amateur archaeologists on other peoples digs,  had their baptism of fire in leading on these excavations, and came through in fighting form. Nothing will be quite as intimidating again.

The volunteers: Many thanks to you all,  I will be linking the blog to a mailing list shortly, where you will all be informed of the current stage of the post excavation process, it will also be a conduit to inform  and advise of up and coming activity. 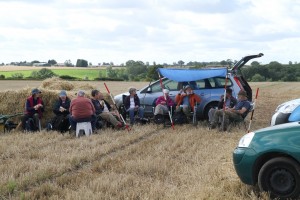 Anthea Ellis from the Jet Coast Development Trust for her  kind loan of the magnetometer on a quid  pro quo arrangement, where I supported their own geophysical activites and data analysis.

Blaise Vyner introduced me to oblique air photography, way back when, and kindly allowed me to accompany him on a number of flights. He was instrumental in providing me with,  and pointing me in the direction of likely sites that may be worthy of revisiting, Dalton on Tees being a case in poin.

Steve Kaye from Bandaarcgeophysics  from his base in the west country has shown a keen interest in the project since I first approached him regarding his data analysis on the likely location of Roman Marching Camps. Steve provided the project with enhanced LIdar imagery, advice and analysis, he has published online across a range of subjects.

Rachel Graham and Robin Daniels from Tees Archaeology for their logistical support and offer of funding for 2015 from the River Tees Rediscovered Lottery funded project.