Weather today cool, overcast, shame about the wind drying out the sand and gravels. Fortunately the rain we have had over the last few days has softened the ground once the surface crust has been scraped away.

Have to say a few words about the diggers, despite the bad weather at times, most have been here throughout the dig in fair weather and foul,  with a few dipping in and out. Top team at digging, good teamworking and cracking social company.

Trench 1 and Trench 2 are now in the recording and photographing phase. Being ahead of the game we have decided to section the ditch feature in Trench 4.

Trench 4 was targeted at a 20m x 10 rectangular feature and one that showed up clearly on crop marks and the magnetometer survey, postulating  that this feature may well provide  evidence for Roman or early medieval  civilian settlement on the site.  The trench takes in half of the long side of the north ditch and part of the short east end including the corner. Finds in the two sections opened today include decorated Samian, Black Burnished ware and greyware, indicative of a possible  1st to 4th century range., additionally a copper pin head was also taken from the ditch. 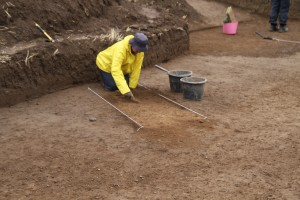 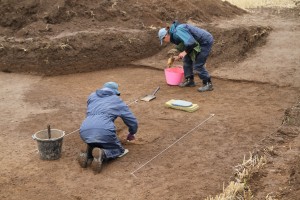 The Trench 5 excavation  some 30m east of the gate was also completed today. This unplanned trench  was opened to offer an second  main ditch section to the confusing archaeology in Trench 1. The ditch is 2.4m wide and 2.1m from the current ground surface to the bottom of the ankle breaker, and 1.4m from the top of the sub soil to the bottom of the ankle breaker.  Behind the ditch there is also some evidence from a textual change of the remains of the bank. On cleaning up the trench after completing the ditch, another ditch was evident running at an angle across Trench 5, interestingly with a black apparently burnt edge on one side, but not the other. 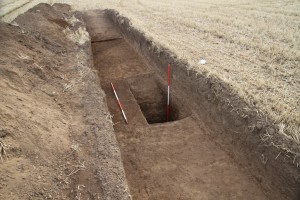 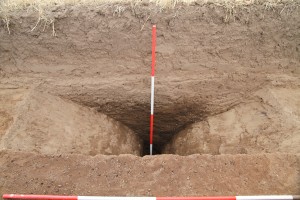 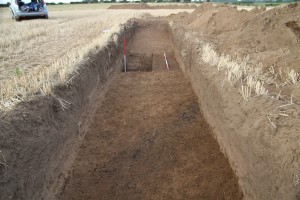 Working on to complete the cleaning of Trench 5 after the others had left for the day, in the silence I heard a strange sound, climbing out of my 7ft hole I eventually found a bird had flown into my adjacent car and was banging its head against the windscreen trying to get out.  anybody know what type of bird it is.