A key element of this excavation is our intention to maximise the use of modern camera technology to record as much as possible of the process.  Of course imagery has long been a staple element of archaeological investigations, but more often than not they are staged images at a particular point in the excavation for the report and the archive.

Until recently because of the expense the only alternative to still images was relatively low quality video recording, however recording  10  days of excavation, some 70 hours of video in total, especially with the excavating process making a can of  Dulux Brilliant White drying on the wall exciting, would drive the average teetotaller to reach for the sauce.

In order to record the excavation using a method that made it watchable and usable, instead of recording standard video at 30 frames a second , which would use horrendous amounts of storage and be totally impractical, we decided to use  time lapse extensively at the rate of 1 frame every 5 second. Time lapse unlike video is actually a series on individual high definition images, each of these images in their own right can be accessed in exactly the same way as a standard DLSR camera image. This method gives us 25000 HD images per day some 250000 over the course of our 10 day excavation.

The final element is the use of a 7m mast to hang the camera on, this gives us the benefit of effectively  low level aerial photography. 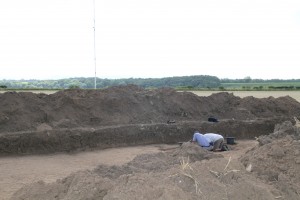 The results so far have been very encouraging features that were not seen on the ground after cleaning down the trench are clear in our overhead.